The ENT Clinic can assess and treat all nose and sinus problems in adults and children.

Nasal blockage, congestion or obstruction can be caused by various conditions, some of which may overlap. The lining of the nose may be swollen and inflamed due to rhinitis, which can be allergic (eg hayfever) or non-allergic. Medical treatment in the form of nasal sprays (steroids and/or antihistamines) or tablets is often helpful, but surgery may be indicated to reduce the size of the inferior turbinates (swellings in the side wall of the nose), known as turbinoplasty. The nasal septum, which divides the nose into two, may be deviated, causing a blocked nose; this can be corrected surgically with a septoplasty.

Chronic sinusitis, or inflammation of the sinuses, can also cause nasal blockage or congestion, as well as nasal discharge, facial pain or headaches, and problems with the sense of smell and taste. Chronic sinusitis may be associated with nasal polyps, inflammatory swellings inside the nose, which also block the nose. The initial treatment of chronic sinusitis is medical, with sprays and/or tablets, but if this fails then sinus surgery may be indicated. This is commonly performed endoscopically, using a camera inside the nose and specialised instruments to remove polyps and open the sinuses.

If extensive or complex sinus surgery is required, Joanne is able to perform both extended endoscopic sinus and anterior skull base surgery as well as the less commonly performed open/external surgical techniques. She has subspecialist fellowship training in rhinology and anterior skull base surgery, and also operates regularly with neurosurgeons, performing endoscopic skull base procedures including pituitary surgery, tumour resection and CSF leak repair.

Anatomy of the Nose 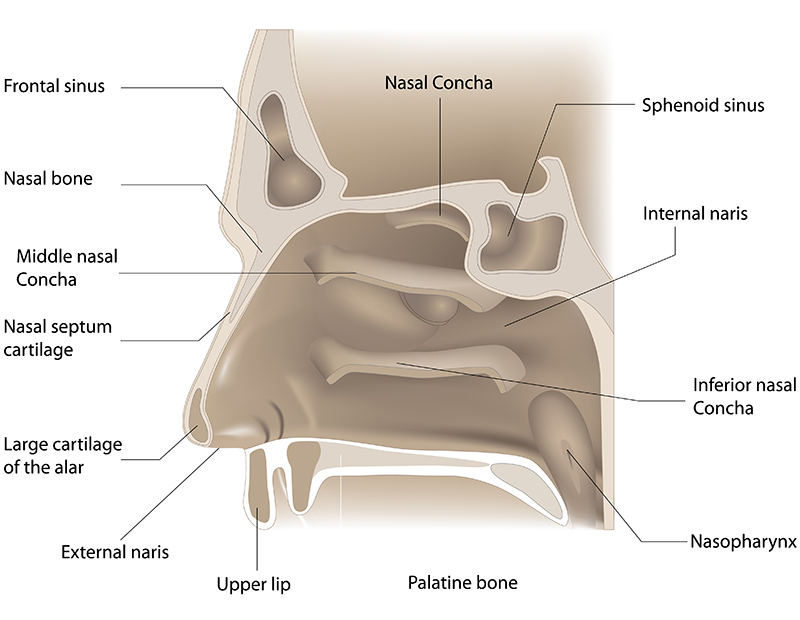